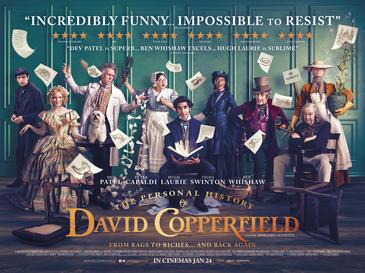 It takes about 30 seconds to buy into Dev Patel as Dickens (and ipso facto David Copperfield). He embodies the spirit and the enthusiasm which led his early death. Iannucci loves Copperfield and teases out the humour which Dickens books are packed with. We.ve had dark and gloomy Dickens for a 30 years so bringing back the life to the novels is welcome. The casting cannot be faulted except it fails on the suspension of belief. Rosalind Eleazar is excellent as Agnes as is Benedict Wong as Mr Wickfield. But there is no way they could be father and daughter. This simply pulls the audience out of the film.

Verdict: a watchable Dickens, but still not a threat to Cukor’s majestic David Copperfield (1935)