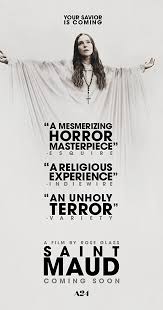 Venturing into the cinema is almost a dance with death so a horror film seems appropriate and Saint Maud will be one of the few highlights of this dreadful year. Rose Glass has faced some criticism about the core plot being well-worn: is Maud bonkers or truly being spiritual? But the story transcends that. Glass makes us feel the mental claustrophobia that is gripping Maud, a nurse, after some unspecified accident. Convinced she is in touch with god, Maud sets about saving a dying dancer, Jennifer Ehle, as her live-in nurse. Saint Maud transcends the horror genre (although it has its jumps) and that final shot of less than a second… As Maud, Morfydd Clark confirms her promise as one of a growing band of young British and Irish actresses who are going to dominate films this decade.

The Trouble with Harry*

The World Jones Made*