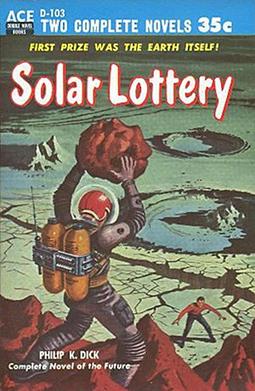 Solar Lottery was the first full length novel by Philip K Dick’s to be published. Be under no illusions, this is hard going. The basic plot concerns an attempt to overthrow a world state were the Leader is elected by a lottery and is subject to constant assassination attempts. One of the rebels becomes the Leader or Quizmaster so it’s how he deals with the attempts to kill him plus a almost incidental story about finding the tenth planet for a new colony.

An early Johnny Cab and Telepaths make an appearance, but this is dreary plod with numerous characters interacting without any real attempt at characterisation. The veil needs to be drawn over the female characters. There are longer and shorter versions published over the years. Let’s just say I prayed for it to end. It says a lot for the standard of SF novels in this period that this was praised.